Mississippi’s 2015 elections were a disaster for Democrats in almost every respect. Buoyed by the popularity of Mississippi’s Republican governor, Phil Bryant, and the fact that his Democratic opponent was an unknown truck driver, Republicans won every statewide election in landslides except for the Attorney General election (and even there, Democratic incumbent Jim Hood won re-election by a narrower margin than he had in the past). Republicans also picked up seats in both houses of the state legislature. However, the one area where Democrats actually did well was the elections for the Public Service Commission, a body which regulates telecommunications and utilities in the state. The Commission is made up of three members, who are elected in districts of approximately equal population. The districts are not gerrymandered, and are generally referred to by their locations in the state; thus, there is the Northern District, the Central District, and the Southern District. Previously, the Commission was 2-1 Republican, however the Democrats picked up one of the seats, and held their other seat, resulting in a new Commission that is 2-1 Democratic.

But how did the Democrats achieve this significant win, especially when Republicans were doing so well in the other races? Let’s take a closer look at each of the districts individually. 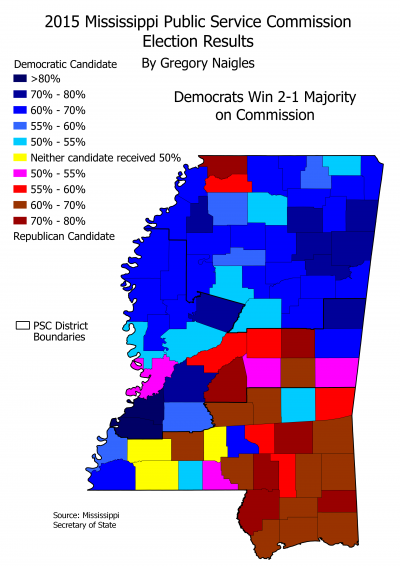 District 1 is the Central District. It contains Jackson and its suburbs, as well as several heavily-African-American counties in the Mississippi Delta region, and the city of Meridian in the eastern part of the state. By presidential voting, it is the most Democratic district in the state, having voted 52.4 percent for Obama in 2008, and 53.7 percent for him in 2012. It also has the largest African-American population in the state; about 48 percent by VAP. However, it was previously represented by Lynn Posey, a Democrat-turned-Republican who won relatively easily in 2011, defeating a Democrat by a 56-44 margin. Posey decided not to run for re-election in 2015, giving Democrats a better opportunity to pick up the district. The Democrats nominated Cecil Brown, a (white) state representative from Jackson, while Republicans nominated Brent Bailey. Bailey did not have the same appeal to Democrats that Posey had, and in the end, the district’s natural Democratic lean asserted itself, resulting in Brown picking up the seat for the Democrats, defeating Bailey by a 53-46 margin. Brown’s winning coalition was pretty similar to the one that Obama used in 2008 and 2012, except for the fact that, predictably, Brown slightly overperformed in the white areas and slightly underperformed in the African-American areas. The following map shows this: Brown underperformed in the Mississippi Delta region, which is mostly African-American, and overperformed in the Jackson area (where he represents) and in the eastern part of the district, which has a larger white population. 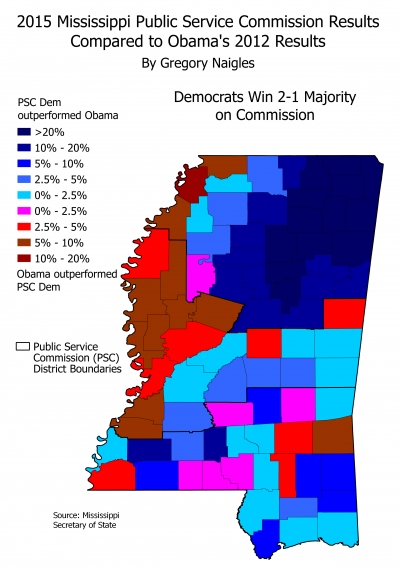 District 2 is the Southern District. It includes all the rural areas south of Jackson, as well as the cities of Laurel and Hattiesburg and the entire Gulf Coast of Mississippi. This is the most Republican of the three districts, having voted 35.4 percent for Obama in 2008, and 35.8 percent for him in 2012. In the past two elections, Republicans have had an easy time winning this seat. In 2011, Republican incumbent Leonard Bentz was easily re-elected by a 60-40 margin. Bentz did not run again in 2015, and the Republicans nominated Sam Britton while the Democrats nominated Thomas Blanton. Britton ended up defeating Blanton by a 61-37 margin, slightly larger than what Bentz won by in 2011. Blanton outperformed Obama in most of the district, the only exceptions being in Jones and Forrest Counties (home to Laurel and Hattiesburg, respectively) and in a few other small counties scattered across the district, but it wasn’t anywhere near enough to prevent Britton from winning.

District 3 is the Northern District. It contains several disparate areas, including the northern part of the Mississippi Delta region, the expanding suburbs of Memphis, the college towns of Oxford and Starkville, and heavily-white Northeastern Mississippi, which historically was solidly Blue Dog Democratic but now generally votes for Republicans. This district voted a few points more Republican than the state as a whole, giving Obama 41.1 percent in 2008 and 41.9 percent in 2012. Two-term Democratic incumbent Brandon Presley (who is related to Elvis Presley, who lived in this area) continued to defy the normal partisan leanings of this district by winning re-election by a 61-39 margin. This was a wider margin than Presley’s 2011 re-election, which he won by only 12 points. Presley lost only two counties in his district: DeSoto and Tate, both of which are in the Memphis media market (meaning that the people there don’t hear as much about him in the news). Presley has consistently lost DeSoto County in landslides due to its consisting of a bunch of Memphis suburbanites who are generally straight-ticket Republicans. However, Presley has consistently run massively ahead of Obama in the central and eastern areas of the district. Presley consistently wins all of the heavily-white counties in Northeastern Mississippi, some of them in landslides. His best performances are generally in and near his home county of Monroe, north of Columbus on the eastern border of the state. He can outrun Democrats by as much as 50 points in this region, as he did in 2015 in Itawamba County, a heavily-white county just north of Monroe.

The following map compares the 2015 PSC results to those from 2011: 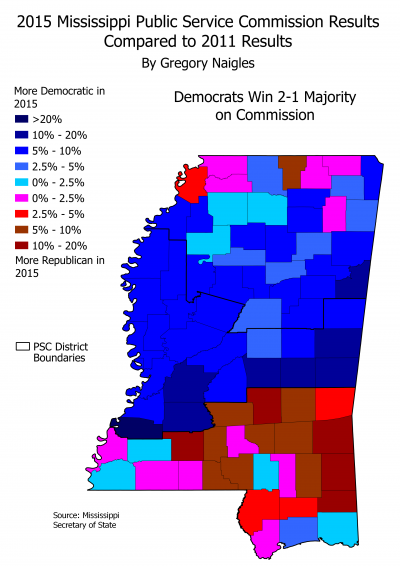 In the Southern District, Tom Blanton largely underperformed the 2011 Democrat in the rural, whiter areas, but he held his own in the more urban and suburban counties (Harrison, Jackson, Lamar, Forrest) and the counties with larger African-American populations (Adams, Wilkinson, Pike, Jefferson Davis). Similarly to the Central District, the results of this district involved it moving closer to the normal partisan lean of the district than it had been in 2011. While this was good for Democrats in the Central District, it wasn’t in the Southern District.

In the Northern District, Presley largely outperformed his 2011 numbers, in many cases by wide margins. Only in a few counties on the northern border of Mississippi did he lose ground, and in most cases it was only a very small decrease.

The following map compares the 2015 turnout levels to those from 2011: 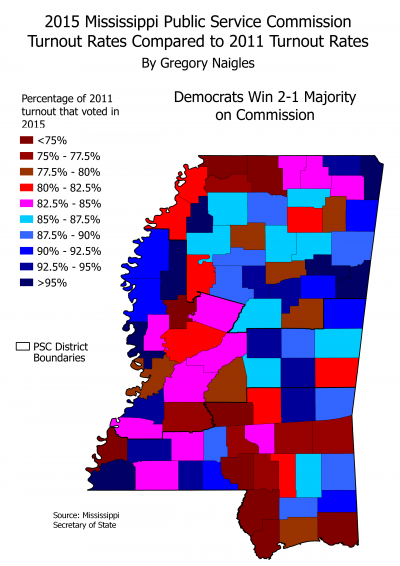 This map dispels a myth that has been going around since the election. Many people seem to believe that the reason why the Democrats did so poorly in the non-PSC elections is because Democratic and African-American turnout dropped significantly from 2011. However, this map shows that that did not, in fact, happen. In actuality, the counties that saw the largest drops in turnout from 2011 to 2015 were mostly heavily Republican counties, such as DeSoto, Rankin, Lamar, Pearl River, and Hancock. DeSoto, the straight-ticket Republican county just south of Memphis, saw the largest drop in turnout, with only 58 percent of its 2011 turnout casting ballots in 2015. On the other side of the coin, only 7 counties in Mississippi experienced a 2015 turnout that was at least 95 percent of their 2011 turnout, and of those 7, five voted for Obama (and a sixth was very narrowly won by Romney). Thus, while it’s clear that Mississippi Democrats had several things going against them in 2015, including a popular Republican governor and an unknown Democratic gubernatorial candidate, low Democratic and African-American turnout was not one of them.