To go along with my maps and analysis of New Jersey’s 2015 State Assembly elections, I’ve created a bunch of cool graphs in R that further illustrate some of the patterns and trends that I discussed previously. 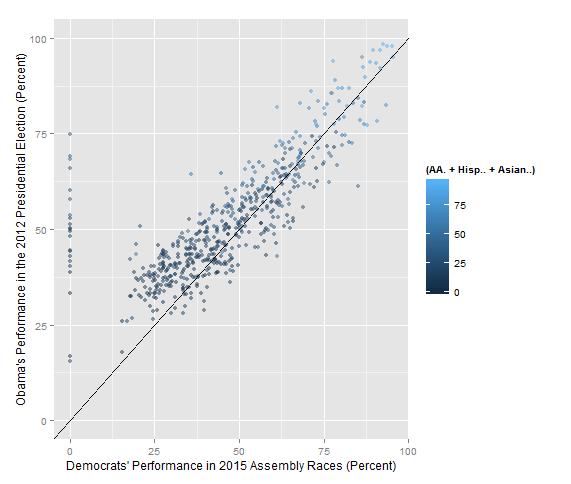 As you would expect, there’s a clear positive correlation. However, some things to notice are:

2) The line of data points where Assembly Democrats received zero percent are the municipalities in LD-8, whose election the Democrats did not contest and thus featured only Republicans.

3) The color of each data point indicates the percentage of each municipality’s population that is African-American, Hispanic, or Asian. Almost all of the data points in the upper right-hand portion of the graph, indicating municipalities where both Obama and the Assembly Dems performed extremely well, are colored light blue, indicating that they have large minority populations. By contrast, almost all of the date points where both Obama and the Assembly Dems performed poorly have a very dark color, indicating that those municipalities are almost entirely white. While this should not come as a surprise, it is nonetheless meaningful to see the pattern visualized.

The next graph compares the Democrats’ performance in the 2015 state Assembly races to each municipality’s voter turnout as a percentage of registered voters. 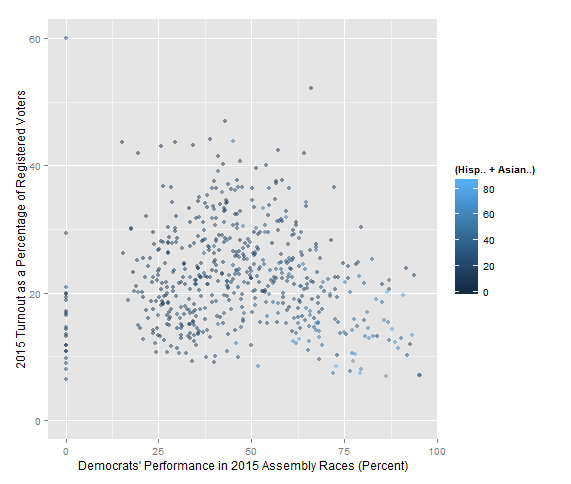 While no pattern is immediately evident, a closer look reveals several interesting trends.

3) One more (rather depressing) note about this graph: only two municipalities in the entire state, out of 566, saw voter turnout over 50 percent, and both of these municipalities have fewer than 300 people. Clearly New Jersey can do a lot more to increase turnout for these elections. (For those who are curious, those two municipalities with turnout greater than 50 percent are Cape May Point and Pine Valley.)

This third graph compares the Democrats’ performance in the 2015 state Assembly races to the area, in square miles, of each municipality. 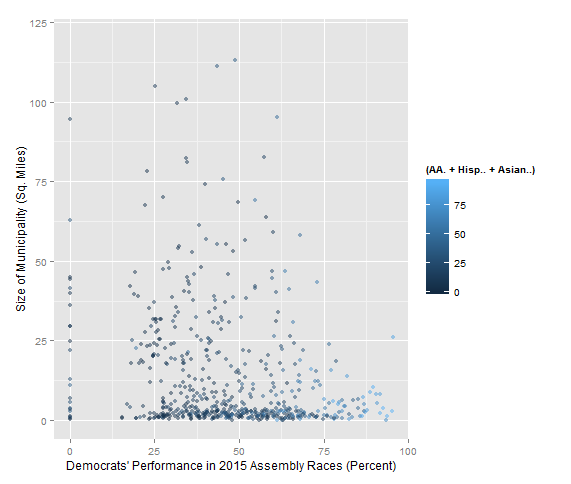 Some thoughts about this graph:

1) The first thing that probably popped into your mind when you saw this graph is that the vast majority of New Jersey municipalities are tiny, fewer than 10 square miles. Part of this is due to New Jersey’s system of municipal organization. A very common type of municipality in New Jersey is the borough, which generally uses the compact populated place model of municipal organization rather than the New England Town model, thus resulting in most boroughs being very small in area. All of the larger municipalities, on the other hand, are townships. As it happens, there’s not much of a correlation between a municipality being a borough or a township and how it votes in elections (I’ve made a box plot in R that shows this).

2) There seems to be a slight correlation between the area of a municipality and how it voted in the 2015 State Assembly elections. However, this correlation only appears to exist in municipalities that voted over 75 percent for the Democrats in 2015. Of those municipalities, all but one are fewer than 25 square miles, and of the eleven municipalities that gave the Democrats over 87.5 percent in 2015, ten are fewer than 12 square miles. It shouldn’t be a huge surprise by now that many of these small, heavily Democratic municipalities are represented by light blue data points on the graph, indicating that they have large minority populations. 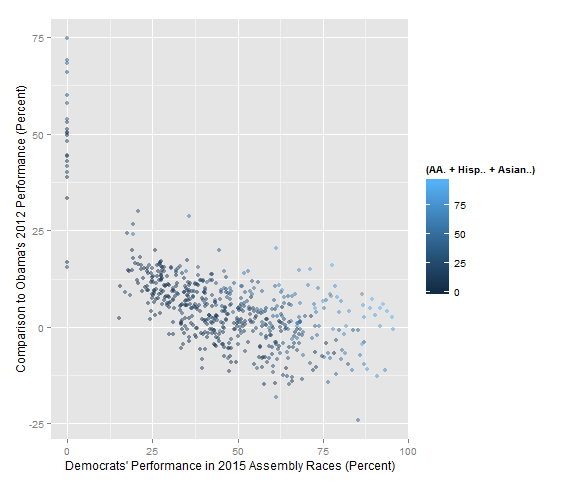 Some thoughts about this graph:

3) Despite the patterns mentioned above, among the most heavily Democratic municipalities, most of them did not see improvements in Democratic performance from 2012 to 2015. In a majority of them, Obama actually did better than the ’15 Assembly Dems. One explanation for this is that these municipalities are all colored light blue on the graph, and thus have large minority populations. The turnout woes among minorities that have been discussed previously may explain why these heavily Democratic municipalities nonetheless saw Obama outperform the 2015 Assembly Democrats.