Amy Klobuchar, U.S. Senator from Minnesota and Democratic candidate for President of the United States, has made her perceived “electability” as part of her argument for why she should become the Democratic nominee for the latter office, attempting to appeal to Democrats who consider defeating Donald Trump to be the most important aspect of the 2020 elections. This narrative has largely entered the mainstream media and become conventional wisdom without a whole lot of scrutiny. Therefore, I set out to determine 1) how electable is Klobuchar, actually, and 2) more specifically, how electable is she with different parts of the Democratic base? To answer these questions, I’ve analyzed Klobuchar’s election results from her two most recent elections (2012 and 2018), and compared them to other elections in order to determine if Klobuchar is in fact a stronger vote-getter than most Democrats.

First, let’s look at her 2012 re-election. This was the first time she went before voters since her initial election in 2006. It was clear that the voters of Minnesota liked what they saw in those six intervening years, since Klobuchar was re-elected in 2012 in a massive 65-30 landslide, winning all but two counties in the state (Pipestone and Rock). And those two counties have the partial excuse of being located in the Sioux Falls, SD media market, so the people there didn’t see as much news about Klobuchar as the rest of the state did.

2012 also saw then-President Barack Obama win a second term. He won Minnesota by a margin of 52-46 percent. And as the following map shows, he underperformed Klobuchar practically everywhere in Minnesota, mostly by wide margins. The only places in Minnesota where Klobuchar outperformed Obama by less than 5 percent were 1) counties not in a Minnesota-based media market, such as the aforementioned Pipestone and Rock as well as Houston in the state’s southeastern corner, and 2) the cities of Minneapolis and St. Paul, where Obama did so well that there wasn’t a lot of room for Klobuchar to improve.

So far, the argument for Klobuchar’s superior electability seems to be holding up. But does it continue to hold up in 2018?

In 2018, Klobuchar won re-election again, this time by a smaller but still large 24-point margin. The map of her results in this election is below. 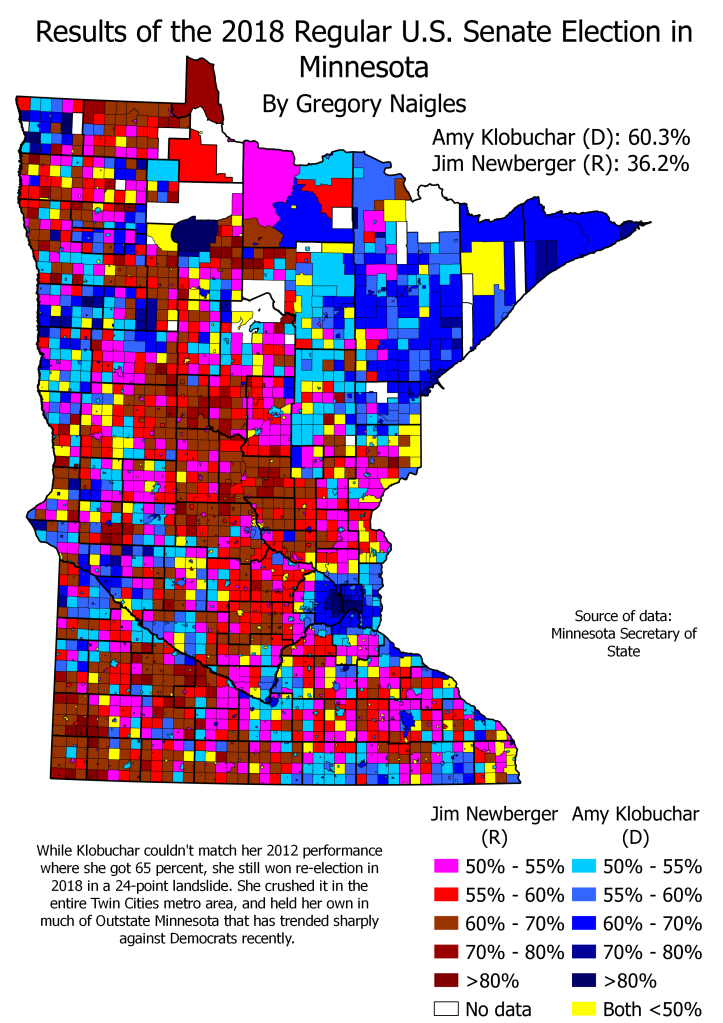 You’ll probably notice a lot more red on this map than on that of Klobuchar’s 2012 re-election. Unlike in 2012, when Klobuchar lost only two counties, in 2018 she lost 36 counties, or almost half of Minnesota’s 83 counties. However, all 36 of those counties are predominantly rural and/or exurban. The largest county that Klobuchar lost, and the only county she lost that has more than 100,000 people, was Wright, with approximately 125,000 people. The nine counties in Minnesota that are more populous than Wright all went to Klobuchar, mostly by wide margins.

In order to answer that question, let’s look at Klobuchar’s 2018 results in a different way. Let’s compare them to Barack Obama’s 2012 results, which were roughly the Democratic baseline in Minnesota before Trump came along and scrambled the electoral map. 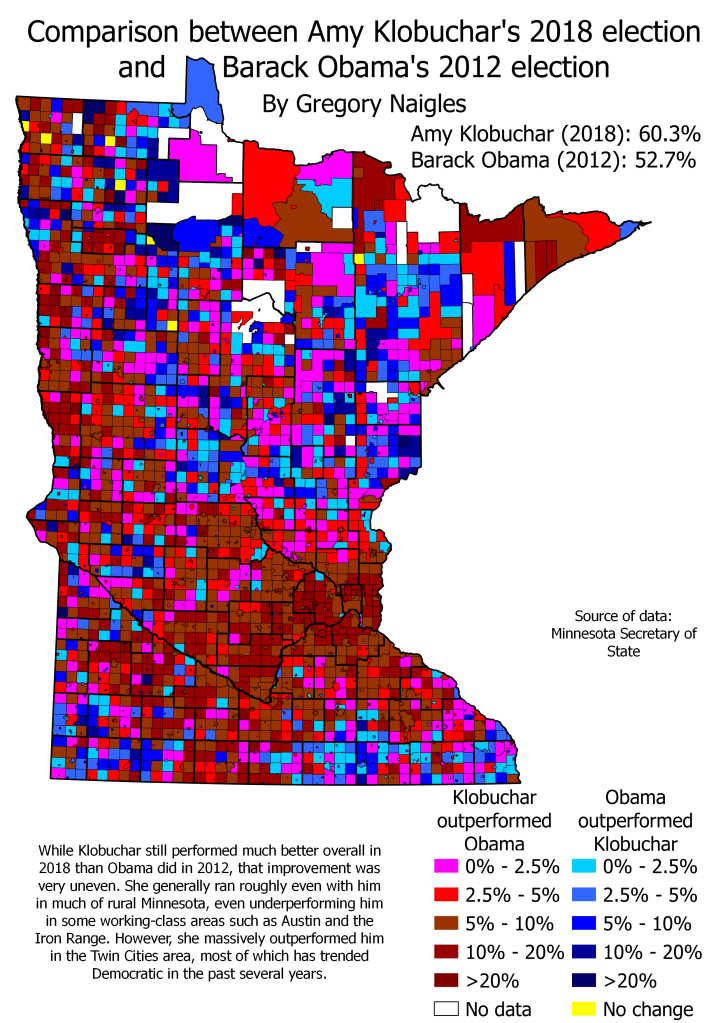 As the map shows, Klobuchar in 2018 substantially outperformed Obama in 2012 practically everywhere in the Twin Cities metro area. However, she ran roughly even with him in large swaths of rural Minnesota, and even underperformed him in some working-class towns such as Austin, Albert Lea, and most of the Iron Range. This indicates that any special appeal that Klobuchar had in rural Minnesota has diminished significantly, since she couldn’t outperform the 2012 Democratic baseline in those rural areas. However, the map also makes it clear that Klobuchar’s appeal in cities and suburbs is still very strong.

One way to illustrate this final point is to directly compare Klobuchar’s 2018 and 2012 election results.

This map illustrates starkly the urban/rural divide in Minnesota. Klobuchar did much worse in 2018 than in 2012 practically everywhere in rural Minnesota, with just a few towns such as Rochester, Northfield, Winona, Mankato, and Duluth sticking out as exceptions. However, in the Twin Cities metro area, Klobuchar largely held her ground in 2018, and even outperformed her 2012 numbers in Minneapolis and some of its better-educated suburbs (which have trended Democratic significantly since 2016).

Casual readers may not realize how much of Minnesota’s population lives in the Twin Cities metro area. In order to show this, I have created a cartogram of this final map. The cartogram takes each municipality and resizes it based on the number of voters there in 2018.

What conclusions can be drawn from these maps? Yes, Klobuchar has won both of her re-elections by wide margins, significantly outperforming every other statewide Democratic candidate both times. However, the fact that she couldn’t outperform Obama’s performance in rural areas in her 2018 Senate election indicates that she will most likely be unable to bring Democratic support in rural areas back to what it was during Obama’s elections (especially considering that Trump undoubtedly has more appeal in most rural areas than Klobuchar’s 2018 opponent did). While the results do indicate that she will probably do better with rural voters than Hillary Clinton did in 2016, Democrats should not expect her to paint the rural Midwest blue.

However, Klobuchar’s strong performance in the Twin Cities suburbs, where she matched or even exceeded her 2012 performance in 2018, indicates that she will be a strong candidate for that particular portion of the Democratic base. This is especially important considering that there are several swing states that are won or lost based on how the suburbs vote, including Michigan and Pennsylvania – both narrow Trump states that Democrats will be eagerly looking to pick off in 2020.

Amy Klobuchar has a stronger electability argument than most of the other current Democratic presidential candidates. She is clearly capable of harnessing existing Democratic trends and picking up some lingering Democratic voters in areas that are trending Republican. But Democrats should not be thinking that she will single-handedly redraw the electoral map.

Gregory Naigles is an election data analyst and cartographer. He lives in Concord, New Hampshire.