New Jersey has a reputation (Chris Christie aside) for being a solidly Democratic state, and thus it was widely expected to vote for Hillary Clinton in the 2016 presidential election. Many people even expected Hillary to improve on Obama’s 2008 and 2012 performances, due to New Jersey’s large concentration of college-educated white voters, a demographic that polls showed was more favorable to her. However, in the actual election, New Jersey voted for Hillary by a 14-point margin, a small drop from Obama’s 17-point margin in 2012.

So what happened? Did those college-educated white voters not swing toward Hillary after all? Or did other voter demographics swing to Trump? Which areas in New Jersey saw lots of Obama/Trump or Romney/Hillary voters? And why did those voters change which party they voted for? For answers to these questions, along with more analysis, plenty of maps, and a bunch of interesting and revealing graphs made in R, read on.

As is usually the case in New Jersey, the Democrat performed very strongly in the populous, diverse NYC – Philly corridor, and in several other smaller cities across the state, while the Republican performed well in the northwestern part of the state, in Ocean County, and in most of the rural areas. But how were Hillary’s and Trump’s performances different from those of other Democrats and Republicans? Below is a map showing how each municipality in New Jersey swung from 2012 to 2016.

What could explain the patterns of this map? Some analysts have claimed that the major trend of 2016 was already-Democratic areas moving even more to the left, and already-Republican areas moving even more to the right. However, that really wasn’t the case in New Jersey. Sure, there were plenty of Republican towns that moved even further to the right in 2016, such as most of the towns in Ocean County, and there were plenty of Democratic places that moved further to the left, such as Cherry Hill, Princeton, Maplewood, and Teaneck. But there were also lots of strongly Democratic towns that moved significantly to the right in 2016, such as Garfield, Bayonne, Gloucester Township, and Vineland, and lots of strongly Republican towns that moved significantly to the left in 2016, such as Medford, Holmdel, Bernards, and Wyckoff.

What do those groups of towns have in common with each other? Some people have speculated that these trends were due to wealth. That theory suggests that rich voters were more likely to swing toward Hillary, while less wealthy voters were more likely to swing to Trump. This is borne out in the fact that most of South Jersey, which swung heavily to Trump, is more working-class, while that group of dark-blue towns in North Jersey is a very rich area. However, there seem to be some exceptions to this rule; Ocean County is not really poor – it’s more middle-class – yet it swung heavily toward Trump anyway. 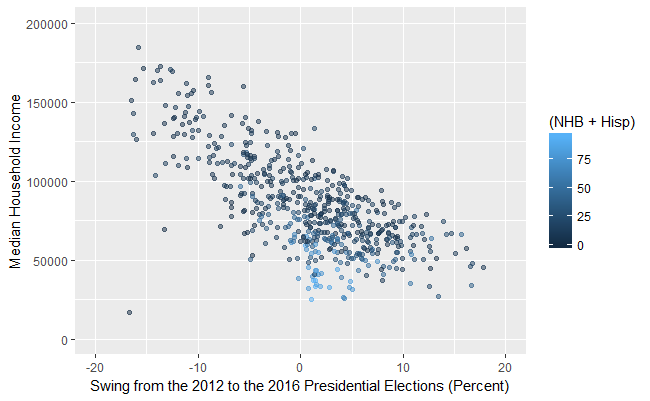 The graph shows a clear, but not particularly strong, correlation between MHI and how each town swung in the 2016 election. You can see that a group of towns that don’t seem to fit the general pattern are clustered in the area with low (<$50,000) MHI but only barely swung toward Trump (their swing is about 1 or 2 percent toward him). You can also see that the dots on the graph indicating those towns are lighter in color than most of the other dots. That indicates that those towns mostly consist of African-Americans and/or Hispanics. African-Americans and Hispanics are generally much less swingable voters than whites or Asians, and this graph shows that clearly. Mostly-white towns with similarly low MHI swung heavily toward Trump, but those mostly African-American and/or Hispanic towns only barely swung toward him.

But even setting those towns aside for the moment, the correlation between MHI and how each town swung in the 2016 election isn’t particularly strong. It seems possible that maybe wealth isn’t the major explanation for these patterns – maybe wealth is simply correlated with whatever the actual reason was for how each town swung. It turns out that that is indeed the case.

That factor is educational achievement. This graph compares the percentage of adults with a bachelor’s degree in each municipality with how it swung in the 2016 election.

I have one more graph that demonstrates very well just how unswingable African-American and Hispanic voters in New Jersey really are. This graph compares the percentage of each town’s population that is non-Hispanic white with how the town swung in the 2016 election.

The graph pretty much looks like a ‘V’. The very clear pattern is that towns with larger percentages of non-Hispanic whites had larger swings, in both directions, than towns with smaller percentages of non-Hispanic whites. This is why many political campaigns use persuasion to try to attract the votes of white people, but focus only on turnout for African-Americans or Hispanics – because the latter are not persuadable. Interestingly, the towns with the largest swings (which are also the whitest towns in New Jersey) had similarly-sized swings in both directions. Neither party would seem to have any particular advantage just looking at this graph – the magnitude of the swings in both directions did not favor either party.

So then, why did New Jersey ultimately swing toward Trump? The reason is mostly due to the larger population of many of the towns that swung toward Trump. A group of large, populous towns, mostly but not entirely in Ocean County (such as Howell, Brick, Jackson, Manchester, Toms River, Berkeley, Old Bridge, Bayonne, Sayreville, Gloucester Township, Vineland, etc.) swung heavily toward Trump. The problem for Democrats was that many other populous towns in New Jersey already voted very strongly Democratic, and thus did not have much more room to swing toward the Democrats. Most of the towns that swung toward Hillary were smaller suburban towns that did not have as great an effect on the state as a whole.

There are a few interesting patterns to point out here. First of all, North Jersey, Central Jersey, and the Jersey Shore saw almost unanimously higher turnout than in 2012. Some of this may be because 2012 turnout was hampered by Hurricane Sandy, but most of it was because everyone had a strong opinion about the 2016 election and wanted to express that opinion. The only exceptions were towns whose populations are mostly African-American – places like Newark, East Orange, Irvington, Plainfield, Trenton, etc. The trend of lower turnout among African-Americans is one that has been seen almost everywhere across the country in the 2016 election. The only other glaring exception is Lakewood, a large, heavily Republican town in Ocean County that is populated mostly by Hasidic Jews. Clearly Hasidic Jews were not as excited by this election as most other people were. South Jersey in general saw smaller turnout increases than North or Central Jersey.

Keep your eyes peeled for more of my articles analyzing the results of the 2016 elections!