New Hampshire’s first-in-the-nation presidential primary took place on February 9, 2016. On the Republican side, there were eight major candidates remaining in the race: Jeb Bush, Ben Carson, Chris Christie, Ted Cruz, Carly Fiorina, John Kasich, Marco Rubio, and Donald Trump. In the run-up to the election, polls consistently showed Trump in the mid-30s, with Bush, Rubio, Cruz, and Kasich all clustered between 10 and 15 percent, but which candidates would finish in what order from #s 2 through 5 was not clear.

Ultimately, the polls proved themselves mostly accurate. Trump received 35 percent of the vote for a solid win. Second place was taken by John Kasich, who received 16 percent of the vote. Cruz, Bush, and Rubio took third, fourth, and fifth place, respectively, and they were all clustered around the 10-11 percent range. All five of these candidates used different coalitions to achieve their results. Further back were Chris Christie, who came in sixth, and Carly Fiorina, who came in seventh. They both dropped out shortly after the primary. Bringing up the rear was Ben Carson, in eighth place, but unlike Christie and Fiorina, he decided to stay in the race and hope for better results elsewhere.

It’s pretty much a sea of red. The only places where Kasich did better than Trump are the Lebanon/Hanover area, the artists’ colony of Peterborough, a couple wards of Concord, the college town of New London, and the touristy Bartlett/Jackson area.

So how did Trump’s performance vary across the state? 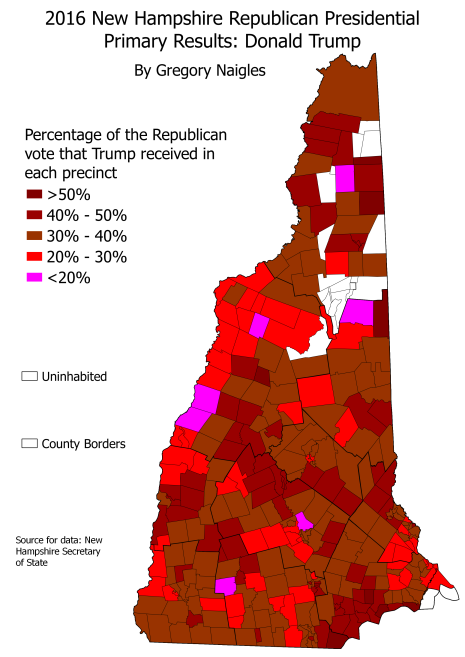 Some of Trump’s strongest performances came in those same working-class towns (Franklin, Rochester, Berlin, etc.) where Clinton did much worse in 2016 than she did in 2008, and where turnout in the Democratic primary dropped dramatically from 2008 to 2016. Thus, it is possible that many of the voters in these towns who voted for Clinton in 2008 are registered independents, and decided to vote in the Republican primary, for Trump, in 2016. The other area of New Hampshire where Trump did particularly well was southeastern New Hampshire along the border with Massachusetts. This area is full of conservatives who moved to New Hampshire from Massachusetts in an attempt to avoid high taxes, so the Republicans here are very conservative. It’s not a working-class area, and thus if Trump is successful at attracting more middle-class and more educated supporters, then his path to the Republican nomination will be even clearer.

Now let’s move down to the other candidates.

As this map shows, Kasich, colored blue, came in second place in most towns. Most of the other towns, particularly those in the east-central part of the state, saw Cruz, colored purple, come in second. Trump came in second in all but one of the towns where he didn’t come in first (the sole exception is Hanover, where Trump came in fourth, after Kasich, Rubio, and Bush).

How did Kasich’s performance vary across the state? (Note that the color scheme here is different from that of the Trump map.)

Kasich’s best towns were Hanover and Lyme, both of which he received over 30 percent in. Hanover and Lyme are both heavily Democratic towns, and Kasich was the only Republican candidate to campaign as a moderate, and to try to convince left-leaning independents to vote for him, so Kasich performing well in Democratic towns makes sense. He also performed well in Concord and the Portsmouth-Durham area, both of which are Democratic. However, he performed quite poorly in the towns that border Massachusetts, in the same areas where Trump did very well. It is possible that Kasich’s campaigning as a moderate turned away many of the strongly-conservative Republican voters in these towns.

Overall, it was Ted Cruz who came in third place. Let’s see what his town-by-town results looked like.

As the second-place map implied, Cruz did very well in the east-central area of the state – places like Rochester, Somersworth, Wakefield, Alton, Gilmanton, Barrington, etc. His performance in the rest of the state was uneven, but one notable trend is that he performed rather poorly in some of the college towns, such as Hanover, New London, Durham, and Keene Ward 1, as well as in the Seacoast area. In fact, Cruz came in 5th place, with only 5 percent of the vote, in Hanover.

For completeness’ sake, here are maps of Bush’s and Rubio’s results by town.

Thanks for reading, and don’t forget to check out my article about the results of the Democratic primary!