New Hampshire’s first-in-the-nation presidential primary took place on February 9, 2016. On the Democratic side, there were only two major candidates still in the race: former First Lady, U.S. Senator, and Secretary of State Hillary Clinton, and U.S. Senator from Vermont Bernie Sanders. In the run-up to the election, polls consistently showed Sanders ahead of Clinton by varying margins.

Before the election, I had made a set of benchmarks to forecast what the results in each town would have been if Clinton and Sanders had tied. That map, with green representing Clinton and purple representing Sanders, looked like this: 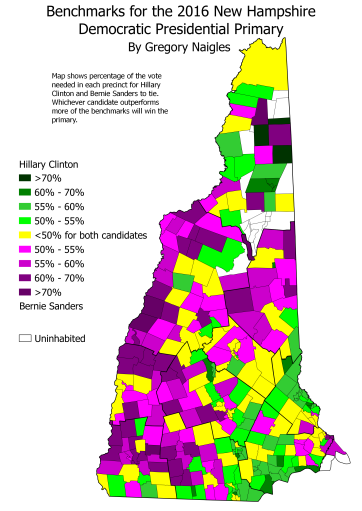 But of course, Sanders and Clinton didn’t tie. Sanders ended up defeating Clinton by over 20 percentage points. And the map of the actual election results, using the same color scheme, looks like this: 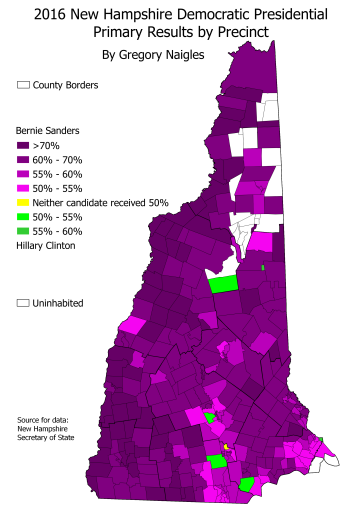 What patterns or conclusions can be drawn from this map? Clinton won only six towns (Bedford, Hales Location, Millsfield, New Castle, Waterville Valley, and Windham), and of those six towns, only two, Bedford and Windham, have populations of over 1,000. Bedford and Windham are both wealthy, strongly conservative suburban towns in southern New Hampshire (in fact, Bedford is the wealthiest town in New Hampshire). Thus, it is clear that Clinton received a substantially greater percentage of support from wealthy voters than from middle-class or working-class voters. This is borne out in the results from other towns, since Clinton did much better than the statewide average in other wealthier suburbs and in the Seacoast area. This is true not only of wealthy, conservative suburbs but also wealthier areas that are more liberal, such as Hopkinton and the tenth ward of Concord. Thus, Clinton’s performance in these areas had less to do with the overall partisanship of those areas than with the relative level of wealth in those areas.

While Clinton may have done passably well with rich voters, she performed quite poorly with working-class voters, and in fact dramatically underperformed her 2008 primary results in most working-class towns. If Clinton’s 2008 numbers had been representative of her results in 2016, then she would have won places such as Franklin, Rochester, and Berlin, all of which she won by large margins in 2008. But instead, it was Sanders who won all of those towns by wide margins. This should be quite concerning to the Clinton team, since Clinton is going to need the votes of working-class white voters if she wants to win the nomination.

The areas of New Hampshire that I had predicted would vote for Bernie largely did, with one glaring exception. As I predicted, Sanders performed very well in western New Hampshire near the Vermont border, and he won the culturally-progressive towns in Cheshire County by wide margins. He also won most of the college towns, including Durham, Plymouth, and Keene, by very wide margins. However, probably the biggest surprise of the night was the town of Hanover, home to Dartmouth. Hanover is consistently the most Democratic town in New Hampshire in general elections, and voted for Obama by a 58-26 margin over Clinton in the 2008 primary, so most people expected that it would go heavily to Sanders this time. However, in actuality, Hanover only voted for Sanders by a 7-point margin, substantially less than Sanders’ overall statewide margin.

Why did Sanders underperform by so much in Hanover? There are several possibilities. One is that the Clinton campaign may have had a particularly strong ground game with Dartmouth students. If this is true, it begs the question of why the Clinton campaign didn’t have similarly strong ground games with students at UNH, Plymouth State, and Keene State. Another possibility is that we should never have expected that Sanders would do well there in the first place, since the non-student residents of Hanover are generally well-off and supportive of the establishment, and thus more likely to vote for Clinton. I find this explanation less likely due to Hanover’s aforementioned strong support for Obama in the 2008 primary, and its proximity to Vermont.

Turnout was expected to be high, but it was not clear which candidate would benefit the most from that. In the actual event, turnout was relatively good, but still lower than 2008 in most towns.

What patterns can be seen on this map? All of those working-class towns that went for Clinton in 2008 and Sanders in 2016 saw much lower turnout this year than in 2008. Thus, the swing toward Sanders in these towns wasn’t just due to Clinton supporters from 2008 voting for Sanders this time; it was also due to Clinton supporters from 2008 simply not voting in 2016. Another pattern is that almost all of New Hampshire’s college towns, including Durham, Plymouth, New London, and Ward 1 of Keene (where Keene State is) saw much higher turnout this year than in 2008. This lends support to the idea that Sanders brought out first-time voters or voters who would not have voted were he not running. The major exception to this trend is, again, Hanover, which saw lower turnout this year than in 2008. This might be because Obama brought out a huge turnout in 2008, which neither candidate this year could match, or alternatively it could be that the Sanders campaign simply put less effort into getting out the vote at Dartmouth than they did at UNH, Plymouth State, or Keene State.