The 2014 elections were essentially a repeat of the 2010 congressional elections in Connecticut, as all five Democratic incumbents won re-election by similar or slightly greater margins than their districts saw in 2010. There were, however, several interesting differences between the two.

Here is a map of the results by town (click on the maps to enlarge them): 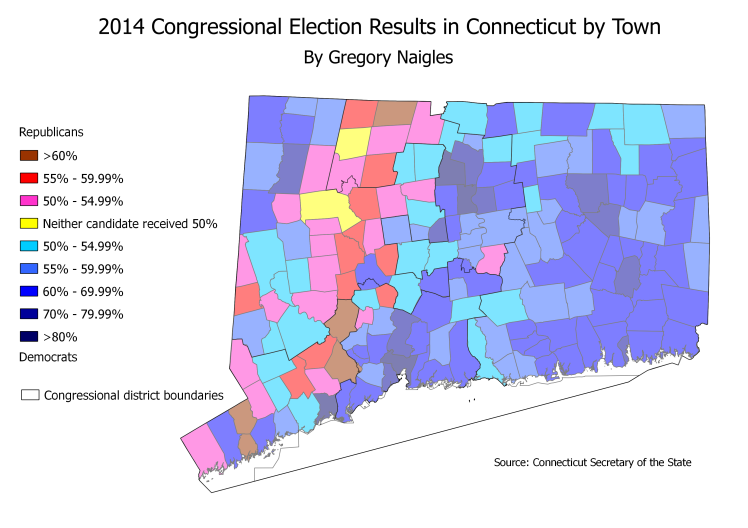 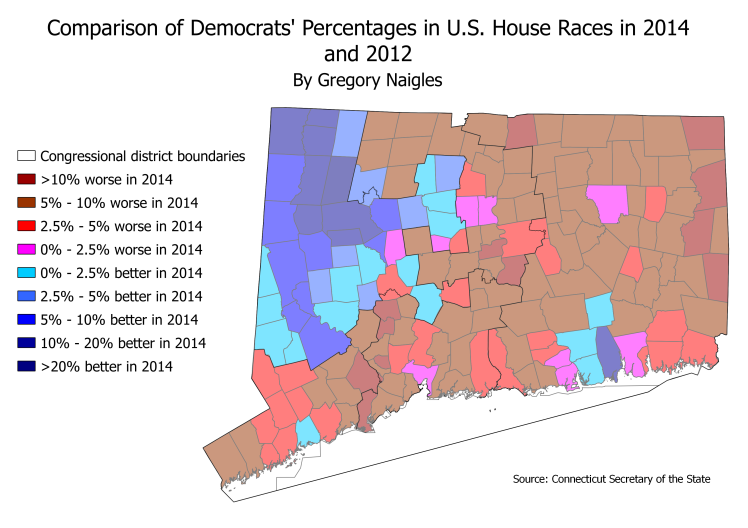 In district 1, John Larson won another easy re-election, a few points wider than his 2010 race. He improved from 2010 in most of the towns near Hartford in particular Wethersfield, while he declined in several of the outlying towns, such as Colebrook, New Hartford, and Portland. His performance declined from 2012 in every town in the district, consistent with the difference in the nationwide political climates.

In district 2, Joe Courtney won re-election with a margin approximately equal to Larson’s margin, which is a testament to Courtney’s strength considering that his district is about six points less Democratic than Larson’s. For the third time, Courtney won every town in the district (he also did in 2008 and 2012). Courtney’s performance declined from 2012 everywhere except East Lyme and a few of its neighboring towns, since, as mentioned previously, Courtney’s 2012 opponent was the First Selectman of East Lyme (and is now a state senator). Courtney generally did better in 2014 than in 2010, and his improvement was greatest in the Quiet Corner (the northeast corner of Connecticut).

In district 3, Rosa DeLauro won her usual landslide victory. She has received the largest percentage of the vote of any congressional candidate in Connecticut in each of the past five Congressional elections. This time, she lost only Beacon Falls and Prospect. Like Larson, her performance declined from 2012 in every town in her district, but she generally improved 1-2 points on her 2010 performance. Her greatest improvements compared to 2010 were in Waterbury and Naugatuck, not surprising considering that her 2010 opponent was from Naugatuck.

In district 4, Jim Himes won an 8-point victory, very similar to his 2010 victory (which was against the same opponent). The only towns where his 2014 and 2010 percentages differed by greater than 2.5 percent were Darien and Oxford. Himes actually won and lost the exact same towns in 2014 that he had won or lost in 2010. Himes’ performance declined from 2012 in every town except Westport.

In district 5, freshman Democrat Elizabeth Esty won a solid 8-point victory over Republican Mark Greenberg, a substantially wider victory than her three-point win in 2012. Esty has made inroads with the Republican base in this district, winning Farmington, Simsbury, and New Milford. In addition, she also just barely won Litchfield, a town that Republicans usually win. She also held on to the Democratic base in New Britain, Waterbury, and Meriden (while still doing worse there overall due to Democratic midterm dropoff). In addition, she also improved dramatically in the Litchfield Hills (where she severely underperformed in 2012 due to her opponent being from there). In some of the towns in the Litchfield Hills, Esty did more than 10 percentage points better than she did in 2012. Esty generally underperformed Chris Murphy’s 2010 performance by 1-2 percent, except in Waterbury, where she did much better than Murphy in 2010 due to Murphy’s 2010 opponent being from Waterbury.