The 2016 Democratic presidential primary has settled into a two-way race between former First Lady, U.S. Senator, and Secretary of State Hillary Clinton, and U.S. Senator Bernie Sanders. The first state to hold its primary will be, as usual, New Hampshire, where polls have shown a close race between the two. Hillary’s advantage is that the is universally known from her long, in-the-spotlight political career, and that, if elected, she would be the first female U.S. President. Bernie’s advantage is that he has represented neighboring Vermont in the U.S. House and Senate for over twenty years, and that his unapologetically leftist campaign and focus on issues such as income inequality has struck a chord with progressives who are unhappy that these issues have been ignored for so long. Bernie’s 2016 campaign has been compared with Obama’s 2008 campaign, and it is clear that Bernie is attracting some of the same voters who voted for Obama in the 2008 Democratic primaries. The main reason why Bernie is not attracting the same level of support as Obama did eight years ago is that Obama’s coalition included African-American voters, who are overwhelmingly supporting Hillary this time. Bernie’s major constituency is college-educated, progressive white people. Because of this difference between Obama’s and Bernie’s coalitions, attempting to use the Obama vs. Hillary results of 2008 to predict the Hillary vs. Bernie results in 2016 would fail in most states. However, New Hampshire is not most states. New Hampshire is only about 1 percent African-American, and a large percentage of its Democrats are college-educated and progressive. Thus, the Obama vs. Hillary results from 2008 can be used as a starting point to create benchmarks for Hillary and Bernie, to determine how well Hillary and Bernie must do in each town in New Hampshire in order to win the primary.

There are two assumptions that I have used to calculate the benchmarks for each town. My first assumption is that Hillary and Bernie combined will receive approximately 95 percent of all votes cast in the Democratic primary. This assumption is borne out in polls, where Hillary and Bernie combined are getting about 90 percent, O’Malley gets 3-4 percent, and the remainder are undecided. The undecided voters will bring Hillary plus Bernie up to 95 percent.

My second assumption is that the swing in each town toward either Hillary or Bernie will be approximately uniform. There are a few reasons why this is a perfectly good assumption. Firstly, while uniform swing rarely exists in most other states, the reason for that is that most other states have large blocs of solid, immovable voters who are not swingable (such as African-Americans, or evangelical Christians). New Hampshire has few of these types of voters. In addition, New Hampshire has a large number of unaffiliated swing voters, and in almost every town in the state. Finally, New Hampshire does not have any towns that have extremely one-sided voting patterns in Democratic primaries. Very few towns are predicted to give either Hillary or Bernie over 70 percent of the vote, so the chances that a uniform swing formula could give a candidate over 100 percent in any town are pretty much zero (this is an issue with uniform swing in other, more polarized states). 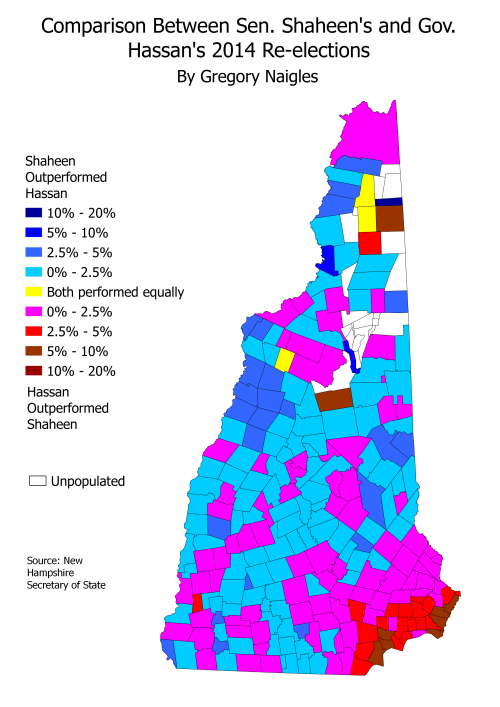 In addition, Senator Shaheen substantially underperformed her own 2008 numbers in her 2014 re-election in towns on or near the border with Massachusetts, as this map shows.

A few thoughts about this map:

1) Hillary is going to have to do well in Manchester, Nashua, and the right-leaning towns east of them. Many of the people in these towns, even some of the Democrats, moved up to New Hampshire from Massachusetts in order to avoid the taxes, so Bernie’s socialism and Hillary’s promise to not raise taxes on the middle class will probably help Hillary here. Hillary will also need to do well in the Rochester-Somersworth area, as well as in Berlin, a working-class mill town in far northern New Hampshire.

2) Bernie, on the other hand, will need to do very well in all of New Hampshire’s college towns (Durham, Hanover, Keene, Plymouth, New London, etc.), as well as in the culturally progressive areas in southwestern New Hampshire (including Peterborough, an artists’ colony), and the touristy towns in the White Mountains, including Sandwich, Conway, Randolph, and Franconia.

3) Some of the bellwether towns will be Concord, Dover, and Laconia. Look for those towns to get an early estimation of how the results will go.

I have also made a table that gives the benchmark percentage for Hillary and Bernie in each town in New Hampshire; if you are interested in seeing this, please e-mail me at ghnaigles@gmail.com.